When you look at this space, can you see a giant synthetic piece of squishy cheese just asking to be climbed on? Probably not. But if you know any kids, I bet they can. 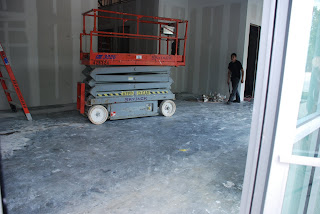 And can you see a giant art installation on the left and a 52” plasma screen tv straight ahead with the sole purpose of welcoming kids in to some place like no other in Houston? Maybe, but maybe not. But if you know Deborah Helman, you know she certainly can. 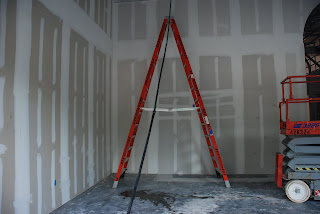 Deborah can because these construction scenes are the beginning of her wildy creative vision. Deborah is one of three women who have come together to offer families in the Heights something special (And all through the inner loop. Heck, they can even come in from the ‘burbs. It’s going to be that good). Wonderwild is going to be the kind of indoor playground you usually find outside Houston proper in lands of sugar and pears, but this inner-loop version is going to have creative twists that make it very much The Heights.
Way back when, in a past life, in another city, Deborah was one of the first 60 employees of Martha Stewart Inc. When the company was small, the title Assistant Director of Marketing meant many things and Deborah wore many hats- some creative, some business focused. When she left MS (and the company had reached over 600 employees), she worked as Director of PR for Parsons The New School of Design, the country’s first design school, and again had an outlet for both creativity and business acumen. These experiences alone are a solid background for an adventure like Wonderwild. Then also consider Deborah has two sons, ages 3 and 2, and yeah, you can see how something like this is right up her alley. From an extra large men’s room equipped with changing areas for dads on diaper duty to custom play pieces made in Europe to healthier food options from Zoe's Kitchen, every inch of Wonderwild has been thought out from the creative side, from business side and, of course, from the parent and child side.
The concept was imagined about a year ago. Deborah had met and forged a friendship with Kayla Corey. As they became close friends, they had this feeling they had “to do something… wanted some venture together.” They would sit around and brain storm all kinds of ideas. At one point they actually thought they would convince their husbands to form a kids’ band “like the Wiggles.” Seeing Deborah's husband is Bureau Chief for Forbes in Houston, I think that was probably a stretch! The ideas kept flowing and one day the concept of Wonderwild hit. This time they “knew it was real.” This idea was going to happen. They got Deborah’s best friend (since they were 5!) involved as well and there it was: a trifecta of “Type A” women channeling the skills from successful careers to take on a business venture that will ultimately benefit their families.
If I had a dollar for every time I wished for a place like this in my neighborhood for my kids… I am glad someone had the smarts and creativity to actually do it. 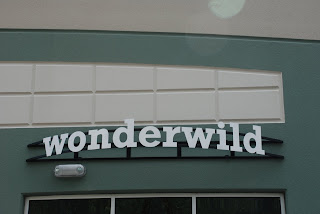 The opening date is approaching quickly with 2 grand opening Halloween parties and I can’t wait to see the final product. I already have two friends who have booked birthday parties for their toddlers. The whole space is going to be reserved for parties on the weekends. This is part business decision and part kid decision. That 52” plasma tv I mentioned will have pictures of the party honorees, welcoming them in to a space which- on that day- is just for them. The 2 party rooms will open to the main play area via huge garage doors, making play and party seamless (If you have ever been to a party where the fun moves from room to room you can probably imagine how cool this will be. If you haven’t, just trust me) and giving it what Deborah describes as a “block party feel.”
The whole set up is intended to create a different vibe than similar venues. It will be an “environment for community.” Wonderwild is intended to be a place where the whole community gathers- beyond our smaller mom circles. Classes will not just be time fillers, but really geared toward critical thinking and engaging kids’ minds. They will be goal oriented, working toward something. Example: art classes will be about more than just come in and do a daily craft for 6 weeks. Instead, the kids will do daily art projects that will culminate in a gallery show at the end of the class series. You can read about the art, music and other classes here: Art, Music, Science, Etc.
And then there is that play area: a 28x17 ft “jump-o-leen,” guaranteeing a solid post-Wonderwild nap for the kiddos; a kid powered train; the essential inflatable slide; and a huge, custom play system (read: indoor jungle gym) that will impress even the most adventurous 3 year olds. In the extreme heat of the summer and rainy days of winter, you’re sure to see plenty of Heights’ kids burning off their high-carb diets at Wonderwild. 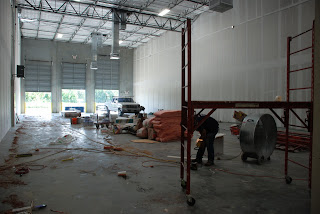 This huge, 4200 sq ft space will soon be transformed by the bright colors of playscapes

It took Deborah and her partners eight months to find a location for this adventure. Inner loop real estate doesn’t come cheap and, well, she lives in The Heights. And she loves it. A Seattle native who lived in the city to end all cities, New York, Houston wasn’t necessarily where Deborah ever thought she would end up. But, like many of us, you follow a career path or a spouse’s career path and then make the most of where you are. Moving from Park Slope, Brooklyn, Deb and her family wanted a similar feel. When they found The Heights, they realized there was “no other place [they] could have lived” in Houston. I know that feeling.
Posted by Viula at 10:20 PM

Email ThisBlogThis!Share to TwitterShare to FacebookShare to Pinterest
Labels: The Heights at Play