I've heard many times over the last few years that Halloween is the most widely celebrated holiday in the US now. I can see that (although Google offered no proof for me tonight) since it crosses all ethnic and religious boundaries that typically define Holidays. The Heights was in fine form, offering events for the entire week before October 31 and it's swarm of trick-or-treaters actually arrived. Parks and businesses hosted parties and plenty of opportunity to get use of those costumes.
My family kept pretty busy. One of the great events we were able to attend was the grand opening of the new indoor playground, Wonderwild. They hosted Halloween parties Friday night and Saturday. We attended the Saturday daytime event. It was so fun and it was really great to see the space [almost] complete versus how it looked only a couple weeks ago when I stopped by. 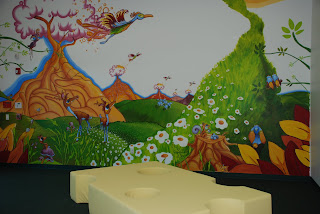 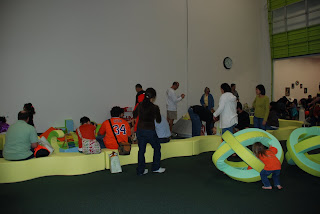 Padded play area for little ones 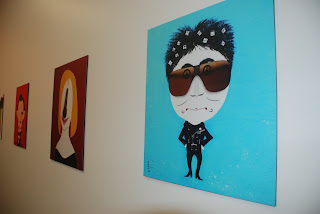 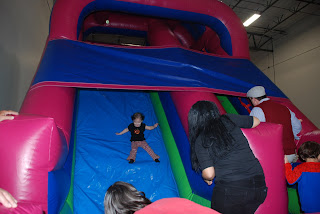 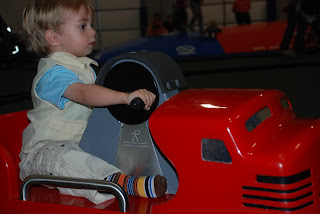 My Big Boy loooved the kid powered train cars. When his turn was over he would get off and just go right back to the end of the line and wait for another turn (and he is dressed as Diego, if you are wondering)

After Wonderwild's party, we skipped home for some quick dinner and Trick or Treating. My Big Boy is not quite 3 yet, so we decided we would limit the houses we stopped at to those between our house and the 3rd Annual Fall Festival at Proctor Park. This is a great event. There is music, a costume parade, games and food. For a lot of parents with small kids, this is a great way to celebrate the holiday without dealing with trying to get a wee one to T-o-T and get all that candy. 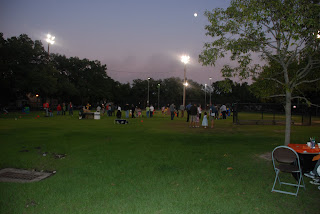 Games in the grass 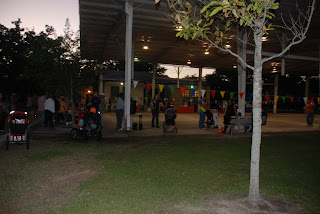 Food and fun under the pavillion

It was a great day and lots of fun for kids. The streets were teeming with costumed kiddos when we left the park. We sat on our own porch for awhile and handed out handfuls and handfuls of candy. A lot of kids come from other neighborhoods, and I know everyone doesn't love it but I think it's so wonderful. I think it's amazing that kids whose own neighborhoods aren't safe enough for them to go door to door on Halloween can come here and walk our streets and feel safe.

I did get to do something more for my own enjoyment than that of the kids' this Halloween. On Friday I was invited as a guest to the 1st Annual Witches Luncheon for Houston Heights Woman's Club. The get-together was held at the not-yet-open Stella Sola in an upstairs banquet room. I was hoping for a sneak peek of the restaurant but oh well!
The "witches" really turned it out for the luncheon. My cute little hat felt very inadequate when I got there and saw how much fun a lot of the other women had with the theme. I learned a lot about the roots, purpose and future of this great club, which has been around since 1900. Yes, it is your grandmother's social club and that is what makes it so cool. If you want to know about the history of this area, there are women in the HHWC whose families go back to the founding days of the neighborhood, when it was Houston's first suburb. One member's great grandfather was the 1st mayor of The Heights. How's that for history? Most of all, though, I was impressed with how much fun everyone was having. There was laughter (and wine) at every table. 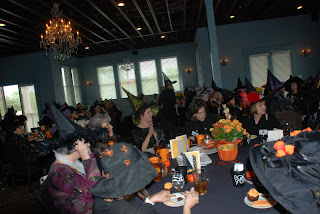 Some of the 70 "witches" who attended the event, including the Judys (last pic) from Oo La La and Tulips and Tutus 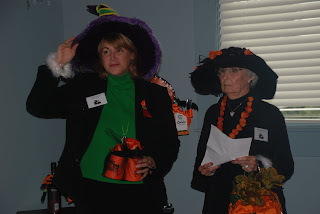 Trudy, who organized the event (and invited me! Thanks, Trudy!), giving away door prizes with Mrs Melvalene Cohen 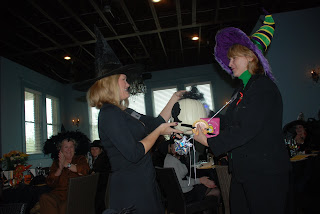 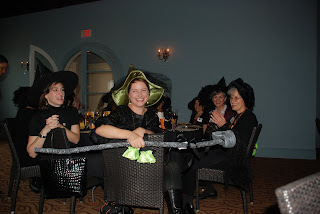 Witch awards were handed out, including "Good Witch" and "Bad Witch" who apparently are now responsible for next year's luncheon

Oh, and the food. YUMMY! If this is a preview of what Stella Sola is going to offer the neighborhood, we are in for a real treat. No tricks. We had pumpkin ravioli in brown butter and sage sauce as an appetizer. All the pastas at the restaurant will be made onsite, which I adore. There is no carb more satisfying than homemade pasta! We had chicken, snapper or short rib as our main course choices. Of course, it was lunch and everyone else at my table got the snapper. I'm just a hardcore carnivore and I love rich, savory food no matter the time of day. I got the short rib in red wine sauce with root veggies. Mmmm. I made an excellent choice and hope hope hope that I will get to order that meal in it's full form when they open soon. 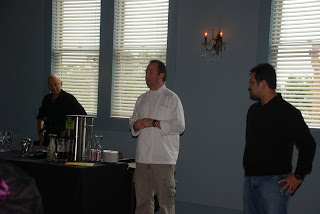 Chef Jason Gould came to speak with the group. He said that he believes Stella Sola will be a great fit for the Heights: casual, comfortable and family friendly. It will be "local ingredients with a Tuscan influence cooked by an Australian Chef. " EDIT: For those of you who haven't been following the drama, Gould is no longer with Stella Sola. He has been replaced by Justin Basye, formerly of Voice and a cured meat specialist. Nothing like mixing it up, guys! 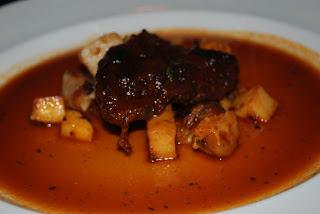 My wonderful short ribs. I didn't leave a morsel on this plate!

Posted by The Heights Life at 5:14 AM