Down on the Corner

I recieved an email from a reader a couple weeks ago, suggesting I stop by The Artful Corner. Like many places around the Heights, I've always seen it, known it was there. I wanted to stop in. I just didn't get around to it. I needed a push and I got one. A big thank you for that email. Stopping by and meeting Margarete was a pleasure in and of itself and I ended up buying a great item from a Heights artist in the process.
Like most artists, Margarete Sanchez-Ripps has had her hands in art as far back as she can remember. In her adult life, she studied pottery at U of H and traveled the southwest selling her creations at art fairs and festivals. She spent some time in New York, working as an art director for an ad agency, but eventually came home to Houston and settled in the Heights.
Margarete bought the bungalow that houses her gallery in 2000, several years before she won the Heights Association's "Renovation Award" and opened a business in it, using it as a rental/income property. This was also several years before White Oak would be any kind of real destination in the Heights. She was just taken with the beauty of Heights Boulevard and decided to forgo the more popular area of 19th Street to have her gallery in the heart of the neighborhood. A gallery of their own is what Margarete sees at the goal for most artists and she feels so lucky that she has been able to realize it.
In the years that she travelled around the southern US, Margarete met and befriended many artists. She knew, when she opened The Artful Corner, that it was specifically these American artists she would want to represent. TAC sells many mediums, but all items have Margarete's 4 important qualifications: artful, fun, happy and well crafted. Certainly you can feel the fun and the happy as soon as you walk in the door- bright, cheery and full of color! 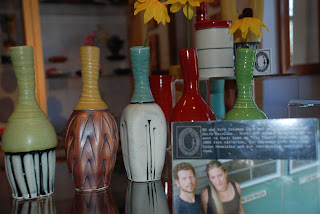 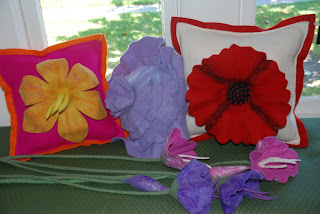 Floral felt pillows and hand felted lariats (front- meant to be worn) priced in the $120 range
Currently, Margarete's inventory represents the creativity and hard work of around 98 American artists and 2 Canadians; roughly 40 of those are Texans, 30 of the Texans being Houstonians and four of the Houstonians being Heights residents. From the Heights, you'll find handmade scarves from Denise Martin, mixed media art boxes by Gloria Sanchez, crocheted earrings by Lisa McCord and a special FotoFest photography exhibition by John Henry Childs. 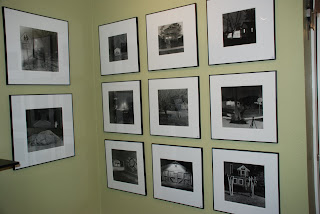 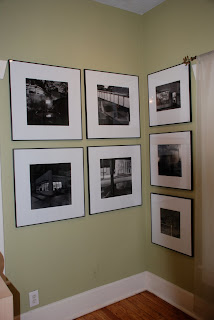 Heights artist John Henry Childs' wonderful Midnight Constitutionals: Walks with Lucy through a neighborhood at rest are mostly sold. One of them to me!
As for her own art, Margarete hasn't thrown a piece of pottery since she opened the store. Being a small business owner is hard, especially when you're the only employee. Margarete doesn't mind though. She prides herself on offering a special level of customer service that you can't get at a mall store. She loves being the spot you can call at 5:55pm (she closes at 6) when you're in a pinch for the birthday gift you forgot to buy for the party you have to be at in an hour. I have to add that it's not like she never takes a day off. Margarete still enjoys traveling to art shows to source new work. At that point, it become a family affair with her sister, Heights artist Gloria Sanchez, stepping in to help man the store. As much as it's hard work, what's most important to Margarete is staying entrenched in the arts community. 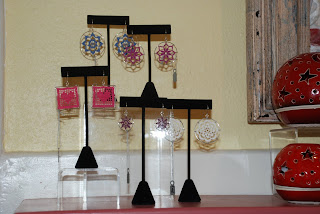 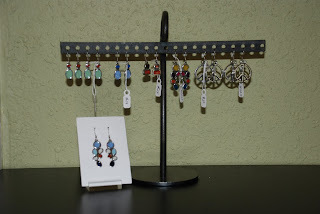 Multicolor earrings and peace signs in silver average in the $24 range
She also really loves being a part of the small business community in the Heights. I love how often I hear shop owners talk about supporting each other, never competing with each other. She does as much as she can to support and promote the work of local artists and drive business to local stores. Margarete was part of the group who started the "Shop Local" section in the Heights Pages and is always at the front of the line for events that benefit the neighborhood. Her commitment is evidenced by her strong local following, with 75% of her mailing list being in 77007-77009. 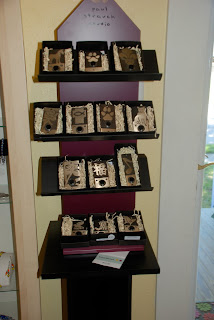 Decorative doorbells are a best seller 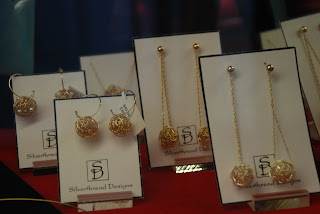 Gold thread jewelry starts at $45 (silver pieces also available)
And here I want to add a story that I think really speaks to the difference between a small business and a national chain:
A couple of months ago, my young son was asleep in the back of the car. It was raining and I wanted a snack, so I went down to the Starbuck's drive thru on W Gray. When I pulled up in the drive thru lane, I could see a man in a wheel chair just outside the book store. It was pouring and he had a broken wheel. He was trying to wheel himself with the one good wheel, holding on to the broken one. In the windows of Barnes & Noble and Jamba Juice, employees could definitely see him. No one helped. I had a baby in the back of my car and was sandwiched in between 2 other vehicles but I was devistated. I could see people in Jamba Juice watching him. Finally I put my car in park and just as I was about to get out and help him, someone finally emerged from the Jamba Juice and pushed him in to the store. I was mortified that it took so long but happy that he finally got help.
This relates to my post about Margarete because as I was photographing felt pillows on her window seat, 2 women were walking down the sidewalk. One fell and scraped her knee very badly. Margarete didn't hesitate to leave me alone in her store (maybe I seem honest, but still...) and help this woman out. She brought them in to the store and gave them 1st aid supplies and a place to sit. She didn't even hesitate; she was practically out the door before I even knew what happened. To me, it just spoke volumes about someone who lives and works in a community, who wants to make where she spends all of her time a better place for all of us to live. Yes, the art she sells is happy and cheery but none of it is as happy and cheery as Margarete, herself.

Email ThisBlogThis!Share to TwitterShare to FacebookShare to Pinterest
Labels: Shop The Heights, The Heights at Work