Can I just start by saying it was painful to have to put "October" in headline here. Where did the summer go? While I am certainly ready for the heat to be behind us, I am not ready for the onslaught of Christmas crap and other holiday junk, which hits the shelves earlier and earlier every year (it's already out at Target). It can make me quite the Scrooge. I digress... On to Happenings in our immediate and near immediate future! 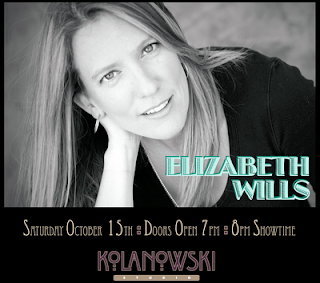 Posted by The Heights Life at 7:30 AM No comments:

I got an email from a recent college grad last week asking if she could guest post on the blog. Usually I dismiss those requests immediately, but I emailed her back and asked what she wanted to write about. She sent me this little write up on this weekend's bike rally. I know the Rally still wants/needs participants so I thought "Why not?" And without further ado:

Registration Winding Down For Heights’ Bicycle Rally/Scavenger Hunt-- Paige Taylor
One of the largest annual events in the Houston Heights is still open for registration for the last week in September. There are 3 days left until the September 29 deadline to sign up. The rally will be open to people of all ages and will be an easy ride for both experienced and novice riders.
Registrants will have the option to ride a 20 mile course which will run through the Heights and a few different neighborhoods in the area. The other option is a five mile ride that is geared to attract both kids and parents alike. Both of the routes will begin and finish at 18th Street and Heights Boulevard at Marmion Park, as participants can ride both courses if they’d like.
Upon registration, those who sign up will receive their rally cards, maps, and clue list for the scavenger hunt.  The scavenger hunt will take place along the 5 mile ride. For the riders that identify the most clues along the ride, there will be prizes awarded. Following the ride there will be a party lasting from 3:30pm to 4:30pm at the park. It will include prizes, food, refreshments and entertainment.
The entry and registration fee is reduced if you register before the September 29 deadline, although you can still sign up on the day of the ride. If you sign up before September 29 at 8pm the entry fee is $20 for the 20 mile ride and $10 for the 5 mile ride. For those who sign up the day of the rides, the fees will be up to $25 and $15 respectively. The pickup for race packets will take place on the morning of the ride at Marmion Park beginning at 8am
Republic Services will be the primary sponsor for the event, they specialize environmental contracts and waste management.  Design & Inspiration, a branding and solution source, helped through sponsorships as well. Minor sponsorship also help came from Boulevard Realty, who assists residents with Houston area apartments, homes and condominium sales.
The proceeds from the event will right back into the community with the restoration, beautification, maintenance and education throughout the Heights area. More information and registration applications can be found at the Houston Heights Association Website. 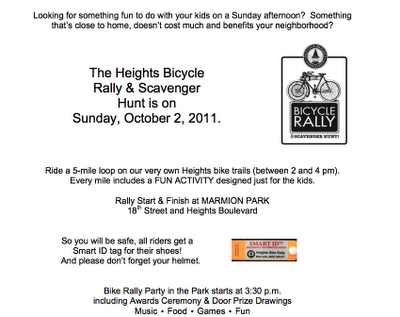 Posted by The Heights Life at 9:10 PM No comments: 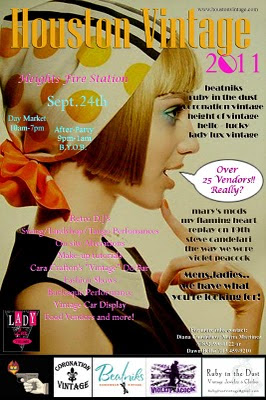 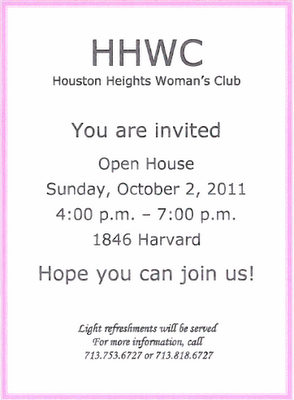 Posted by The Heights Life at 11:45 AM No comments: 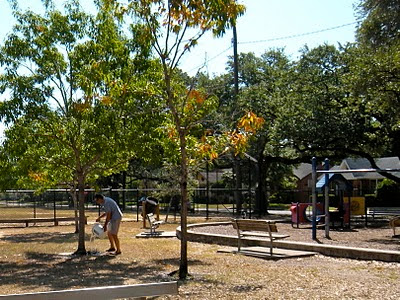 Remember a couple of weeks ago when the weather "cooled" to the low 90s and we all let out a little sigh of relief and decided to go outside again? My family was so excited and ready to get in some good park time. We had been in a state of reverse hibernation, hiding from the intense heat instead of sleeping through the bitter cold.

We loaded up our red wagon with all the necessary park supplies: blanket to relax on, small trucks and digging tools, a soccer ball, bug spray, sunblock, cold water, fruit and bunny crackers. Big Boy rode his bike, training wheels squeaking from lack of use. Wee One road in the wagon, the park supplies heaped on his lap. As we got close to the park, it was a real joy to see people. Kids on skateboards, parents counting to 10 as little guys scrambled to hide, games of catch and tag. The park was alive again.

Then we noticed what wasn't alive. The grass. The big, open area of Proctor was brown and dusty. The small, sandy area near home base (where the kids dig) had grown to a sand pit three times it usual size. And the trees.... So sad and droopy, some with brown leaves. It was a sad sight to see; it almost brought the excitement of just being there down to Neutral.

After about 30 minutes of hanging at Proctor, I saw a red car pull up. The driver got out and opened the hatch to reveal 2 large coolers and a 5 gallon bucket. The man filled the bucket, walked in to the park and dumped it out at the base of a small tree on the north side of the park. Repeat. Take the cooler out and dump the remaining water. Leave. Come back. Repeat. During my family's time at the park he made at least 3 round trips, bringing buckets of water to the smaller, needier trees.

I approached him. "Thank you so much for doing this," I said. He was worried about the condition of the trees. It wasn't a lot, he said, but he wanted to do something. He said he didn't think he could do enough for the big trees but that maybe he could do something for the small ones. I told him I was feeling the same way about the Norhill esplanade but hadn't realized how bad it got around the park.

Now that it's rained a bit, I am more optimistic for the trees of the Heights. I hope this week's Weather Underground predictions are better than our local news station's. They're saying possible rain daily. Local sources say rain today and sun the rest of the week. I never thought I would want rain so badly.

And who knows if this little bit of rain we've had will save the trees or not. We can hope so. We can also say "Thanks, Scott" for helping give them a fighting chance.
Posted by The Heights Life at 10:25 AM No comments:

Email ThisBlogThis!Share to TwitterShare to FacebookShare to Pinterest
Labels: A Heights Snapshot 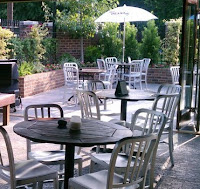 Sunday, September 25, 10 am- 1 pm: SPICE UP YOUR LIFE- An Ayurvedic Cooking Workshop at Studio Nia Moves

Sunday, September 18, 2-5 pm: "Build Your Own Compost Barrel" Workshop at The Houston Arboretum

Thursday, September 22, 7:30 PM: Opera in the Heights kicks off their 16th season with "Daughter of the Regiment"