Lights In The Heights- Update

A long time Woodland Heights resident attended the Lights In The Heights meeting this weekend and was kind enough to provide me with an update to share with you. Now read up on what we might see in the future of one of the Heights' largest and best known events: 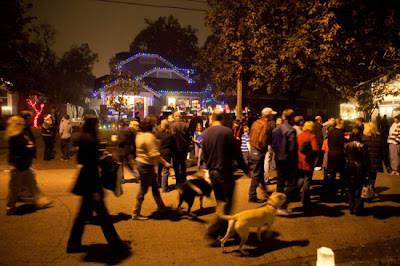 The City of Houston Charter requires that the City Council expand to eleven single-member districts at such point that census data demonstrates that the City’s population exceeds 2.1 million residents. With the much anticipated release of the 2010 US Census, we will begin the process of redistricting in order to add those Districts. The City is interested in hearing from you and your neighborhood regarding your suggestions for the configuration of the new council districts.

There are several points at which you may submit information for the process:

Posted by The Heights Life at 7:49 AM No comments:

Heights Snapshot: The Call of Duty 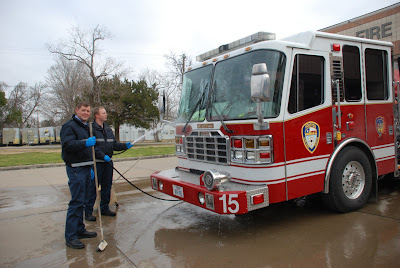 Thursday, February 10, 2011
9:00 AM
HFD Firestation 15
Click here for a brief history and some stats on Station 15
5306 N Main
Let me just start by saying as I type this, it's a gorgeous day. The past 3 days have been amazing and today is going to be at least 8 degrees warmer than the average temp for mid February. It's patio weather, to be sure!
However, that was not the case last Thursday as Andy Eckert (left) and Adam Marley were washing their engine at Station 15. Not yet above freezing that morning, it was hard for me to just stand and chat with these guys. Both were upbeat, though. Considering what they see and do in the line of duty every day, I'm sure truck washing is a welcome respite. Plus, it was Andy's 1st day on the job! Apparently, every "first" for a rookie includes a treat afterward. Post- truck washing, cookies and ice cream were waiting in the station.
Me: Wow, so on your 1st day they've got you outside in the freezing cold with a water hose, washing stuff. Life as a rookie?
Andy: Well, the Academy is pretty thorough. I washed a lot of stuff during my training there, too.
Adam: Ha- I've been here 3 years and I'm still washing trucks. What does that say?
As I hopped back in to my car, I wished them a "quiet, boring day." They laughed and gave me a wave. Great guys with a tough, tough job. I think we can all appreciate them being so close and so ready and willing to help when needed.
Posted by Viula at 8:00 AM 2 comments:

Email ThisBlogThis!Share to TwitterShare to FacebookShare to Pinterest
Labels: A Heights Snapshot

Thursday, Feb 10, 10 AM- 11:30 AM: Valentine Card workshop a Write Now!
Friday, Feb 11, 2011, 6 PM- 8:30 PM: Heights Beatniks opening for Diedra Lizcano
OUTSIDE THE HEIGHTS:
Saturday, February 11, 10 AM- 1 PM: Basic Book Binding- Leather journal class at Texas Art Asylum
IN OTHER NEWS:
Have you heard of Better Block Houston?
Also, The Corkscrew is plotting its return and looking for sort of grassroots investors.
Posted by The Heights Life at 2:44 PM No comments:

Saturday, February 5, 11 AM- 6 PM: 1st Saturday Arts Market is back!
Saturday, February 5, 8 AM- 4:30 PM: Happy Belly Studios Grand Opening
Saturday, February 5, 6 PM: G Gallery opening for Quick Draw, featuring art by J Todd Allison and the music of Morgan Sorne
IN OTHER NEWS:
That sweet little shop on Studewood, Hello, Lucky has extended their hours to make it even easier for you to buy handcrafted, local, and reclaimed.

OUTSIDE THE HEIGHTS:
The Watson Gallery in Montrose is having a Valentine's show on Thursday, February 10, 6 -10 PM. While great artists like Chloe Stewart, Michelle Huff, Paris Holt, Susan Freeman, Jimmy Phillips, and Jon Garner have already signed on, the Gallery still has room for additional artists.
Posted by Viula at 11:09 AM No comments: