A few weeks ago, I was driving home from who knows where and came across this: 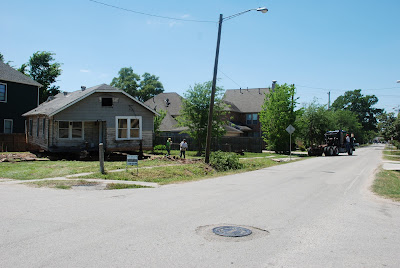 House chained to a truck with a sign for a moving company
A couple of neighbors were outside watching and I thought I would park for a minute and see what was going on. I figured it would be pretty cool to see a house get hoisted up on a truck or something like that. At first it looked as though this old yellow truck was going to be the carrier. I soon realized that was wrong. There was no way this old tow truck was going to hoist up and carry a house. There was another truck tethered to the house by a chain, but it looked like it was just the cab section of an 18wheeler with some kind of winch on the back. Was a bigger machine coming, I wondered?
The guys working the job stopped the trucks and were finding old pieces of plywood and board around the house, putting them down on the ground on the other side. What was going on? Whatever they were trying to do, it clearly wasn't working. 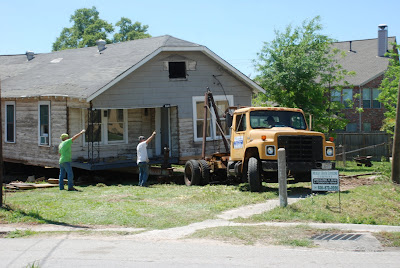 They fiddled and made adjustments. I started to think I wasn't going to get to see anything worth bragging to my kids about. 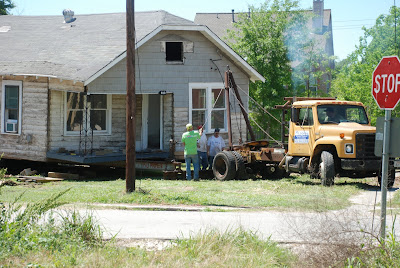 But then they changed their tack, moving Mr Old Yellow over to the other side and confirming Mr Blue Cab was ready to rumble. 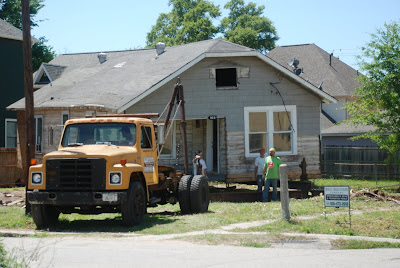 At this point, one of the guys who seemed to be in charge walked my way and I stopped him to see where the house was going.
"It's not being moved anywhere," he told me. "It's just changing direction."
"On this same lot?" I asked. Basically, it was just a change of address. The house was currently 933 Herkimer; soon it would have a new address on 10th St. 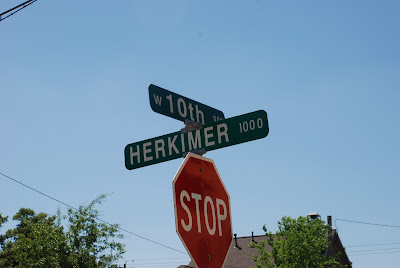 "Interesting." I muttered. "It has something to do with the historic district," he told me, but he didn't know what or why. I don't know what or why either. I can figure only 2 possible scenarios.
1) 10th is the border to a historic district. By giving the house an address on 10th, the property owners are ensuring it doesn't get torn down.
or
2) 10th is outside of a historic district, but the 900 block of Herkimer is in a HD. Moving the house to have a 10th St address means the house can be demoed.
Can anyone think of any other reason for the property owners to move the house? Does anyone know the borders of the district? Considering that area of the Heights is far more new homes than old, I was surprised to think there was a Historic Designation over there at all.
In any case, they rearranged the trucks in to a formation that seemed to be working. Both trucks hit the gas, causing Yellow to smoke and Blue to loose his footing. 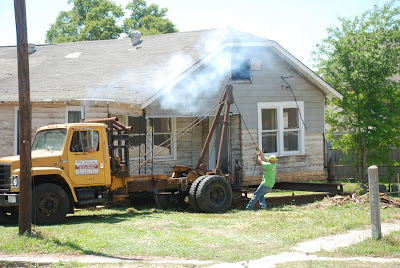 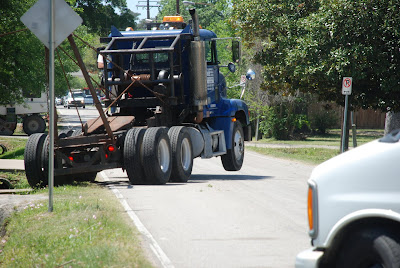 But the house did move, sliding on huge steel beams and random pieces of plywood... 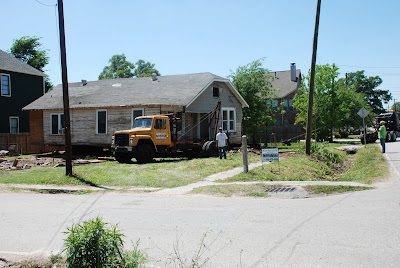 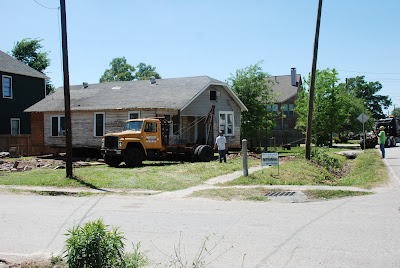 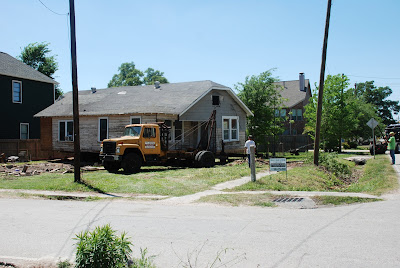 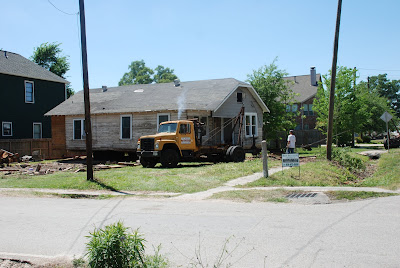 Eventually landing here, 90 degrees from where it had sat for the last ~80 years. 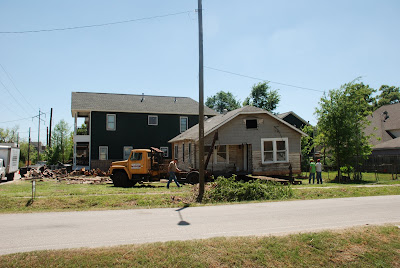 In the middle of typing this post, I got up from my computer and drove over to 10th @ Herkimer. The house is still there, has new piers under it and an orange tag on the front door. I'm guessing whomever owns this house is trying to save it. I still don't know the answer about the Historic District and moving the house. I was wondering if I could find HCAD records for the owners, see if it was a business like Bungalow Revival, but then I realized... I don't know the new address.
Posted by Viula at 8:59 PM 6 comments:

Not everyone may be aware that HISD planned to close Love Elementary as a cost saving measure. Love Elementary is one of the oldest schools in Houston and it's been on the radar of the booming population of young families in the Heights. If you're not aware of the threat of closure, you may also not be aware of the struggle to save this historic school in our neighborhood.
Parents started getting involved with the active PTO at Love before their children were even school age, hoping to have somewhere wonderful to send their kids when schools like Harvard and Travis are at capacity. Many just wanted to be able to help shore up the school they were zoned to. Love's Principal, Robert Chavarria, is an open and enthusiastic administrator, liked and respected by parents, teachers and students. He welcomed parental involvement and everyone saw great things coming for Love's future. Current and future school parents were completely blindsided when it was announced that Love was on the chopping block. They mobilized and called out to the entire neighborhood for help. Like every struggle against City bureaucracy, there were times when it seemed a little hopeless. The neighborhood fought on, though, and received a positive outcome this week as the school closure announcements were finalized, preparing for the May 12th vote.
Without coming right out and saying it, evidence in the HISD Press Release points that Love has been saved, listed as a school that will receive new students from the (unfortunate) closing of Stevenson Elementary in Cottage Grove.

"Stevenson Elementary (current enrollment of 357 students) would close. Students would be redistributed to Memorial and Love elementary schools." 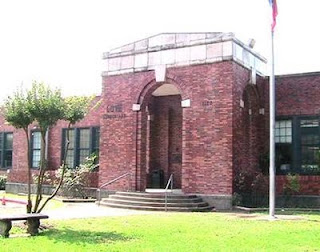 Love Elementary
1120 W 13th
It really is amazing what we can do when we pull together! The thing about the effort to save Love Elementary that makes me most proud is what a community effort it was. It was not just parents of kids going to Love; it was parents from all over the Heights, many who already have school age kids in other schools or residents who don't even have kids yet! Everyone came together to show that our neighbors' struggles are our struggles. It was evidence of the understanding of a common future. Educating our kids is tantamount to our success as a society and having neighborhood schools for our children is of great benefit to everyone in the Heights. Schools are huge community builders. Through the efforts to save Love Elementary, we have once again woven the fabric of neighborhood tighter.
Congratulations to all the hard working teachers, administrators, PTO parents and community members who made this happen!
Posted by The Heights Life at 8:21 AM No comments: 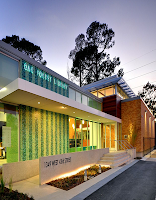 I recently received an email from Heights resident Nadia Lauterbach, a Designer with her own residential studio in the neighborhood. She has recently started a blog about architecture, design, travel, art, decoration, that kind of thing. The most recent post is about the Victorian Architecture of the Heights and I thought I would share it with my own blog readers. Nadia says "I know there are several blogs bouncing around about the Heights, but I thought this one might be a little different since it is someone with an architecture degree, as well as a homeowner, doing the writing. I plan to do a whole series about the Heights on different topics." Sounds interesting and I can't wait to see more!

Wednesday, April 6, 7 PM- 10 PM: Sons of Perdition (view trailer here) at 14 Pews
Friday, April 8, 4 PM: Hand rolled cigars and Cuban music at Heights Cigar Lounge
Saturday, April 9, 8 AM - 2 PM: Heights Odd Fellows Garage sale
PLAN AHEAD:
Saturday, May 21, 5:30 PM- 10 PM: Great Taste of the Heights
OUTSIDE THE HEIGHTS:
Thursday, April 7, 5 PM- 7:30 PM: Soccer Festival with the Houston Dynamo
Saturday, April 9, 10 AM- 6 PM: 5th Annual Midtown Art in the Park
Saturday, April 9, Noon - 5 PM: PRETTY LITTLE THINGS - Vintage pop-up shop
IN OTHER NEWS:
A Letter from Love Elementary's PTO President
As you probably know by now, we within the Love Elementary community have been deeply involved in a campaign to save our school from closure due to massive cuts to the budget of HISD. Closure of our exemplary community school will not only affect the hundreds of families, teachers and staff from our school, but all of the schools in the Heights.
The information that has been shared with us, indicates that EVERY school in the Heights will be affected by this. If this proposal moves forward, the 428 students at our school will divided between the 3 schools in relatively close proximity.Though nothing seems to be decided yet, the schools as of now are: Harvard, Field and Sinclair. And again, this will not only affect Love, Field, Harvard and Sinclair, but ALL Heights area schools. Many who attend these 3 schools will be rezoned to others. Many who choose these schools, but who are not zoned to these schools will have to return to their zoned schools and all of schools will be rezoned
If this proposal is allowed, approximately 143 Love students will be coming to these 3 schools next year. What does that mean for YOUR school?

We all know that the Heights is experiencing a baby boom, and with the help of city officials, and Heights community leaders, we are gathering the demographic data that reflects the fact that ALL elementary schools in the Heights need to stay open.
We already have the support of many heights community members rallied behind us, but now we need YOUR help. We need the administration to know that all of the schools in the Heights area are united in this campaign to keep our schools open.

Members of the HISD board and administration will be coming to our school for a community meeting next Thursday, April 7. We urge you to attend this meeting and share with your school's community. If you would like to say a few words or write a letter, please let us know. We will be putting together a packet for the HISD representatives with Demographic and other data, petitions, and letters of support.

Here is our online petition: http://www.ipetitions.com/petition/savelove/
We also have a special facebook page for this campaign: http://www.facebook.com/pages/Save-Love-Elementary/183201738391323

Thank you! Please let us know if you have any questions,

Bronwyn Lauder, President, Love Elementary PTO
w.g.lovelementary@gmail.com
*Views expressed in this letter are the personal views of Mrs Lauder and not the views of Love Elementary
Houston Arts and Media Fundraising to complete Comedy Documentary
Posted by Viula at 8:44 PM No comments: