I am often talking people away from the ledge when it comes to expectations regarding a new restaurant. I have to explain that a patron must significantly lower their standards in at least the first month. It's a general rule of the service industry. For some reason, no matter how much you train and prep, things will be rocky. You can hire a great staff and have a clear vision, but it still takes time to get it all running in a way that will satisfy the expectations of even the average customer, never mind the picky one. Having been part of a restaurant opening staff, I know the challenges first hand. I was an excellent waitress with lots of experience. I studied my menu and my wine list. I had great people skills. Until opening night... You would have thought I just learned to walk, had a 5 word vocabulary and had never eaten in a restaurant, never mind worked in them for a decade!

Things are not going to go perfectly. This is the very reason reastaurants have soft openings and it is also why I will always always defend the staff until they reach "should have known better" territory.

I haven't found that this rule applies to many other industries. There is just something about restaurants and what we expect from them. However, after a trip to the new Studewood Kroger, I was left wondering if an establishment like a supermarket deserves the same courtesy?

Certainly the staff at a store opening is new, although some of the better employees from other locations are often pulled to help get through the opening rush. I wouldn't expect many mistakes in terms of general operations, though, as Kroger has over 2400 stores, including 200 in Texas, according to their Kroger 2011 Fact Book. I would imagine they have it down by now.

I would be wrong. Here is a little look at what I found inside the new store.

Let's be nice and start with the plusses.

1. It's new. That means everything is clean and sparky and in working order. Who doesn't like that?

2. Many of the aisles are nice and wide. Notice I didn't say "all." I am not going to judge that the aisles are different sizes. Maybe everyone isn't as in to symetry as I am? Still, the wide aisles in frozen food were nice and comfortable even as several shoppers stopped their carts and opened the freezer doors. Why canned veggies don't get as much of a berth, I don't know. 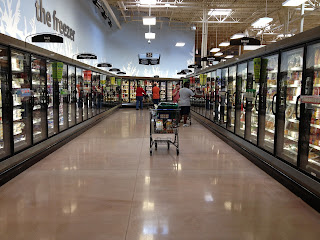 Some aisles are wide enough for 4 carts to fit down comfortably, while others force 2 people to have to jockey to pass.

3. They have price scanners. While I don't use these often, I do see them used and think they are a nice       convenience factor for people. 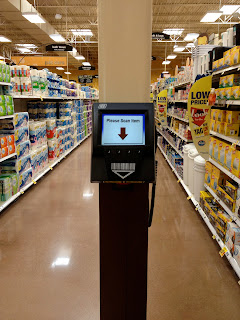 4. They have lots of little signs that really break down the aisles to even smaller categories. For example, in frozen foods they have frozen meals broken down by type, so there is even a sign for "lite meals" rather than just regular frozen dinners. For a 1st time shopper, these little designations did help.

But this is where the positives stop and the topic of organization gets me to the cons.

1. This store is not well organized. While I realize it was my first time in, it should not have taken me 15 minutes to find Pace Picante Sauce, aka salsa. I looked at the large, marquee style aisle signs and saw "Salsa and dips." Great. However, that aisle was all full of chips. It did have "salsa and dips" but only the Tostitos brand that goes with the chips. I walked the whole aisle to be sure I wasn't missing something, and finally stopped to ask a woman stocking shelves if she knew where I could find salsa. She said there was some on that aisle but I said I was looking for Pace or other brands of [real] salsa. She suggested I check in "condiments." This made sense because that is where salsa is at the 11th St store. I walked up and down the condiment asile. I looked very carefully at all the shelves. I asked a fellow shopper just to make sure I wasn't missing something that was right in front of me. We saw barbecue sauces and salad dressings and hot sauce and ketchup and marinades. No salsa. 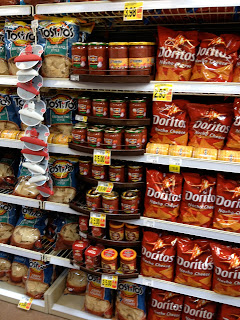 A chain with 200+ stores in Texas should know this is probably not what people are searching for when they want "salsa." 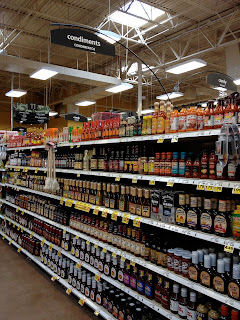 Searching the "condiments" aisle won't yield anything spicy for your tortilla chips, either.

I finally found the salsa, after asking another employee who also didn't know where it was, in the "Latin American" foods aisle. Really? This makes sense at Kroger Corporate? This section had a small sub-section sign reading "salsa & dips" but wasn't under the marquee of "salsa & dips" like the Tostitos brand.

No, this isn't the end of the world. This is just one thing I was looking for, but I could bet that there have been other people looking for things other than salsa that had this same experience. It's grocery shopping. It shouldn't be hard but this was brutally annoying. 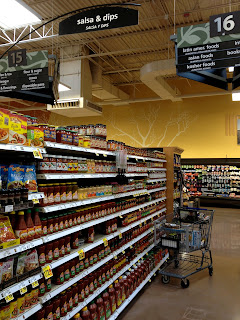 2. The way things are shelved doesn't seem to make any sense. The cooler along the wall in the adult beverage section mysteriously morphs in to kefir and then in to the organic milk and cheese. But not the organic yogurt. You have to turn the corner for that.

All the non-orange juice "Simply" products- lemonade, limeade, pink something- are together. These are wedged between the other real orange juices on the left and and the Sunny Delight and mixed stuff on the right. "Huh?" I say to myself. "Would they really not carry the Simply Orange?" They do, but it's not with the orange juices and the other "Simply" products. It's all the way to the left, after a wall in the cooler. Again, not life shattering or even really news worthy outside of the fact that I am writing about what a disorganized mess this supermarket seemed to be, but it's counter-intuitive and makes a mundane task more frustrating than it should be. 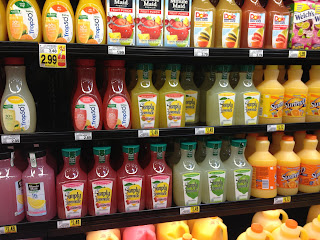 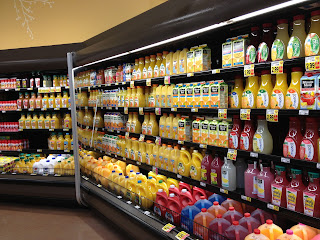 There it is. All the way to left. Not between the orange juice and the other "Simply X" products.

3. But here is the real issue: quality. This is the 2nd biggest complaint I hear about the Kroger on 11th after the rotten customer service. There are always issues with the food. I should have known when I hit the produce department that I wasn't going to be happy with this store. I wanted a bag of butter lettuce. That's all.

Every single bag I picked up looked like this: Brown. It was gross. And it wasn't just the butter lettuce. Check out 2 different romaines below. Not much else you can say about that. 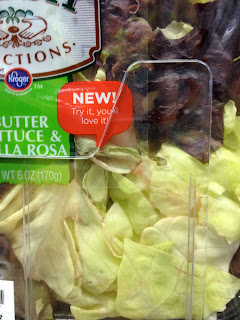 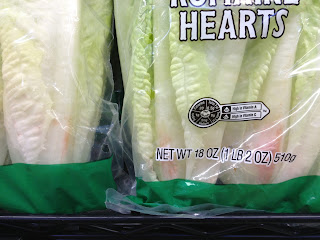 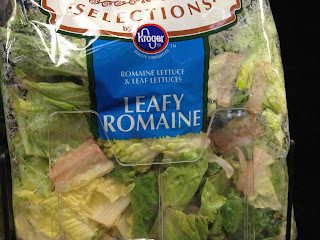 Generally, it was just a big disappointment. This store seemed to be lacking the variety of the 11th St store in some sections like canned veggies. It wasn't very busy and the employees didn't seem very enthusiastic. There were no samples. The one sample station (for some yogurt drink) had no product and no one manning it.

I worked as a cashier at a Stop & Shop when I was in college and I was well trained on how to pack groceries. Because this has made me particular about how they are packed, I try to put some effort in to make it easy. When I started unloading to check out, I put my reusable bags and an insulate cooler bag on the belt first. I put everything on the belt in an order that should make it be easy to pack (Meat together, fruit together, frozen together, boxes/dry goods together). As I was unloading my cart on to the belt, the bagger put all my frozen stuff in a regular (reusable) bag and then held up my insulated bag and asked "What do you want me to put in here?" Despite putting everything frozen or cold on the belt together, I ended up with one stray frozen item thawing between a box of cereal and Goldfish crackers. The head of organic red leaf lettuce that I paid too much for, because the bagged butter lettuce was so bad, was found squished under a bag of Gala apples. Just like 11th Street, the cashier and the bagger gossiped with each other while I stood there. The cashier told me I saved $7 and some change and then wadded my receipt up and handed it to me. The End.

If you had a better or similar experience, let me know.