My interaction with True North started with this email from Heights Kids Group early Saturday morning:

Bungalow Rooftop in the median on Heights Blvd

Does anyone know anything about this? Someone put a rooftop (and part of a house/garage?) in the median on Heights between 4th and 5th. Looked like workmen were arriving with tools to remove just now. (hope not) Looked like a statement to the death of the bungalow. Spot on IMO. Go see quickly if you are interested.

A quick update shortly after noted that they were not removing it, but had actually added a steeple to it. Someone wondered if it had to do with the fire at Heights Presbyterian... Then someone announced: it is an art installation. The rooftop at 4th St has had everyone talking, with multiple pictures posted to The Heights Life Facebook page and in my Twitter and Instagram feeds. 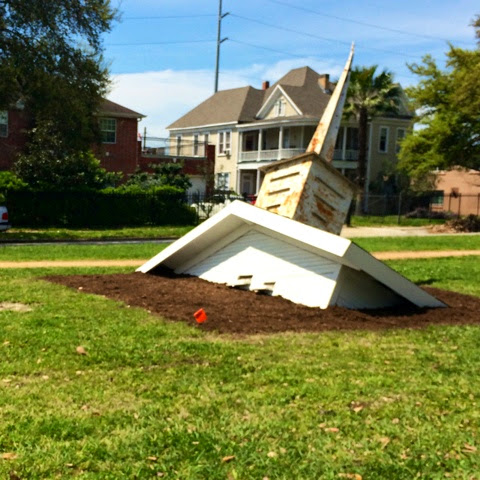 So, what's the real deal on the project? It's called “True North” and has been a long time dream of Gus Kopriva, owner of Redbud Gallery on 11th and an icon in the local art scene; a name recognized both nationally and internationally.  Kopriva has long dreamed of producing large scale public art exhibitions in Houston. He hatched a plan "to expand the placement of public art pieces to numerous locations throughout the city and particularly along the esplanade of Heights Boulevard." The esplanade, which is a Scenic Right of Way from White Oak Bayou to 20th Street, has long enjoyed the tender, loving care of the Heights Association with native trees, flower gardens, irrigation systems, drinking fountains, the much-loved jogging trail, plus memorials, benches, gazebos, and public "Thank Yous" to the likes of long time residents, business owners, and volunteers like Carl and Melvalene Cohen. With much effort and cooperation, this project got approval from the City’s Parks Department and Public Works as a major location for a public art exhibit. And now we all get to benefit.

What is True North about? The idea is for a sculpture project that "is a representation of local works of contemporary art along the esplanade for the enjoyment of our community and visitors.  Exhibits—produced by highly recognized Texas artists—will foster the understanding and advancement of art." Sounds good.

The first True North sculpture installation will be in place for roughly nine months.  There will be ten total sculptures from eight artists, including a 2-piece project from Lee Littlefield, who passed away last year and to whom the show is dedicated.

Here is the line up, in no particular order:

Carter Ernst- The only piece by a woman artist, "Pointing North" is actually not installed yet.  Weather caused some delays, but sometime on the weekend of April 4 you can expect to see a large fiberglass dog on 600 block of Heights. Her piece is inspired by Ernst's own dog and, as Gus Kopriva noted in our chat, is perfect for the Heights, a very dog-centric neighborhood.

Dan Havel- Pictured above, the church that launched so much speculation is "Wildlife Sanctuary." Back in the 1990s, an old church was torn down/converted in to a funeral home on 18th at Columbia. Havel is re-introducing a piece of Heights history back to the neighborhood, but he is also making this architectural remnant functional with a purpose. If you get close, you'll see small doors that hold bird seed for the many feathered friends that live in and travel through the Heights. Another elemtnet of note: the steeple was once hit by lighting, which twisted it.

Paul Kittelson- Lawn Chairs (my apology to the artist. I failed to get the official name of this really awesome piece). Kittleson is known for large scale, whimsical art like giant popcorn pieces and lighting strike. He also does a lot of public works. A sculpture prof at UofH, his piece is simply "about furniture that is utilized a lot in the Heights." A piece of wall art with the fabric used for the chairs will be available at the Heights Association auction next weekend.

Lee Littlefield- His "Cypress Flowers" should look familiar to anyone in Houston. He took cypress and pine wood and used those materials to create brightly colored trees which are installed all over town.

Patrick Medrano- "From the Hood to The Heights" --- Medrano has taken the common architectural element of the shotgun house, suited it for dogs, and gave the dogs' house oars for a canine escape from some kind of imminent flood or hurricane. Once again, we love our dogs in the Heights.

Steve Murphy- "Things You CAn't Get From Books" Kopriva isn't sure what that means! LOL! In any case, this abstract sculpture is found in a small stand of trees, giving it more of a presence.

Dean Ruck-  "Hourglass"- This sculpture on 18th, is 14' tall with 150 5" mirrors. Dean is well known for his previous works with Dan Havel, most notably the Inversion house in Montrose.

A year of planning and a Mayor’s Initiative Grant through Houston Arts Alliance, along with private donations, has made this project possible. There has been effort from many notable locals working with Kopriva. A Heights icon herself, artist Chris Silkwood is a long time community activist and was also leadership for this bunch of loveliness.

It's only been three days and I already love everything about this art installation. I asked Kopriva if there would more sculptures or other projects after these are gone in November? He can't say right now but I think he hopes so. He sees Houston really bursting in to the national art spotlight right now and believes that there ample room for projects like this around our lovely city. We "have a lot of Boulevards," he noted. He wants to see the neighborhood's reaction and take community in to consideration. I think this is a thoughtful way of operating. I feel pretty sure, based on the excitement I've seen so far, that our community will welcome projects like this many times over.

Like all art, our interpretations will be subjective. I imagine the piece open to most interpretations will probably be "Wildlife Sanctuary." Kopriva shared a story with me about being stopped by a pastor during the installation of the piece. "Is this a church?" he asked. He was concerned about a sinking church and what that might be symbolic of. "Oh no," Kopriva told him. "It is arising. It's being re-born." The pastor was lucky to have someone to work on his perspective with him that day, allowing him to leave in a more positive place than he arrived. Not everyone will be able to interact with the curator of this project or the artists who created it, but certainly many discussions will be had about all of it and what it might mean.

Some might muse about the meaning of True North and how it applies to each sculpture. The name  is the most literal part of the project: it is a reference to Heights Boulevard, which does, indeed, run true north.
Posted by Viula at 1:18 PM