The Beach is Calling

Summer in the Heights. When people talk about summer treats these days it's all about snoballs/raspas, and it often seems like there are 2 games in town: Mam's and Tampico. Both places will be packed any given afternoon as Heights area families seek refuge from the heat and humidity. But I learned today that we are missing something. It's right there, calling, practically shouting at us. I wonder how we don't seem to be hearing it? It's the cold, frosty call of Mango Beach!
To be fair, I do remember some chatter about Mango Beach when it 1st opened. Someone went, talked about it a little and that was it. The chatter died down, though, and then there was a rumor that it closed. Still, I could see the brightly painted building every time I took White Oak down to Sawyer Heights shopping center. Typically a sunny little building like that would get and hold my attention. It is loud. It was yelling at me. I didn't hear it. Until today. And that, my friends, is a shame because by not hearing it, I was missing out.
I finally made up my mind to heed the call and check out Mango Beach after a conversation on a Heights message board. I got off the computer, in to my car and went. As simple as that. I pulled up to one of the spaces in front of the little building. The scene across the road: dusty air and the whir of a bright green John Deere cutting grass at Stude Park. It would have been almost bucolic were it not for the midday traffic of a major interstate just behind the tractor. The door said "Open" and even though there was a to-go window, the sign lead me to assume there was an inside as well. You know what happens when you assume.... I realized quickly by the look on the employee's face that I had made a mistake. I backed out and in my embarassment ordered quickly without even looking at the menu. I knew I wanted a snoball and I always go for the old school flavors, so I ordered a small cherry and handed over a $10 bill. Having not paid attention, I was very pleasantly surprised when I got $9 back! 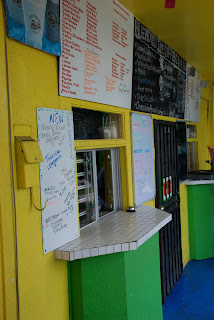 Don't be fooled by the door on the right. Order at the window!
Now, would it be light and fluffy, almost snowy like Mam's? Or would it be hard and crunchy, like a snocone from a carnival concession stand? It came out bright red and you could tell she hadn't scrimped on the syrup. It was kind of a funny cone on top- almost like a soft serve ice cream, not the pyramid I've grown used to. I took a heaping spoonful and got kind of what I had expected: fluffier than a snocone but not shaved with the extra careful hand of our friends at Mams. For $1, though, it was mighty fine. 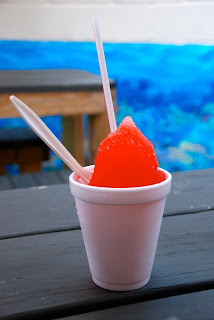 Raspas come in the myriad flavors you'd expect. Small 8oz $1. Med 12 oz $1.50. Lg 16 oz $1.75. Jumbo 32 oz $2.75 (but I can't imagine who would need 32 ounces of snoball!)
As I was ordering there was a young(ish) guy doing repairs on a ladder. When he saw me take out my camera, he asked me about what kind it was, if it took HD pictures and videos. Alas, no, I told him. I wish. "Do you work here too?" I asked. "It's my place," he said.
Simel grew up in the Heights. "For 31 years" he told me when I asked him how long he's lived here. That makes him about 31.5 years old. He said he grew up playing t-ball and then baseball at Stude Park. After games, he would go for raspas at Tampico with his parents. More recently when his younger brothers were playing ball at Stude, he thought that it would be great to have something closer to the park and started eyeing this empty building with a to-go window behind the convenience store. Simel asked around at the convenience store and locals at the park to see who the building belonged to. No luck. No one seemed to know. He even looked up the HCAD records but that didn't give him a way to get in touch with anyone. Then, one day it was like the skies opened and beamed down a "For Lease" sign at just the right time. He called as soon as he saw it and next thing you know he had "signed a really long lease" and his daydream was about to become a reality. 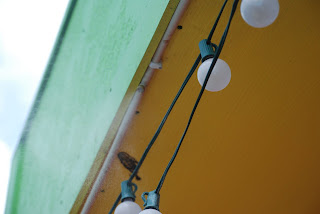 In addition to music and free WiFi, Simel has also installed misters around the building. You can sit on the deck, enjoy a cold drink and keep cool. What could be better during a Houston summer?
Simel is your classic small business owner. Do-it-yourselfer, clearly proud of what he has accomplished with high hopes for everything else it can be. Also obviously proud is his mom, Josie, who helps him out at the shop. Another aspect of being the proprietor of a small business like this is that very often it's your top priority but not your only responsibility. Today, Simel was able to hang some speakers and make some small repairs. Tomorrow, he will be back to work at his real job: Harris County Deputy Constable. When he isn't spinning those 2 plates, he has another up in the air- going for a second Associates degree (his 1st is in Criminal Justice). That's a lot going on but it doesn't seem to hamper his spirits. He was thrilled to take time from his chores and talk about his hopes for his business. It's really inspiring to see people in love with what they are doing!
As I was chatting with Simel and Josie, 3 customers approached the window and a couple minutes later, a tall pink cup of wonderful came out through the opening. I walked up to the them and asked if I could take a photo of this great looking drink. Sure, they said and then told me to wait around. The best was apparently yet to come. 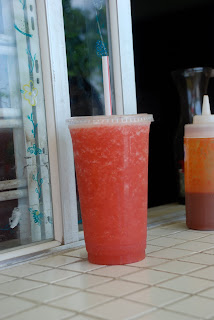 The 3 young ladies work across the highway from the park. They said when they need a break from work, Mango Beach is where they come to treat themselves. Today, a big frosty drink was accompanied by 3 orders of elote. It looked so good but I can't imagine eating hot corn drowned in mayonnaise in 95 degree heat. Also present was a bag of chicharrones, doused in the same chile de arbol used for the elote. They seemed undetered by the heat, pouring liberal amounts of chile sauce on the corn and mixing it up, sampling a few bites before securing the to-go lids. 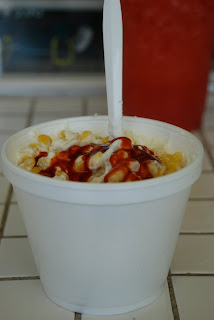 Elote- boiled, buttered corn kernels in mayo, topped with chile de arbol which you add yourself. 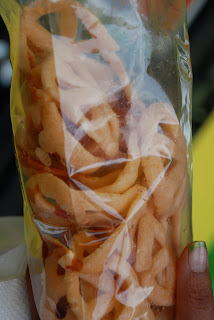 Pork rinds doused in chile sauce
I asked Simel if he had ever had Mam's and he said no. I tried to explain the soft, fluffy texture of their ice. I told him "New Orleans" style. He said his machine is for "Hawaiian" ice. I know a lot of shaved ice lovers do indeed covet the Hawaiian style so it may very well be to your liking. While raspas were his original idea, he has branched out to a lot of different drinks. The tall pink goodness that I had seen come through the window before was called an "aguas frescas" by it's owner but it was non-traditional in that it was blended rather than juice, fruit and water over ice. I didn't even see what they called it on their menu but I am sure you can just ask and one can be yours. 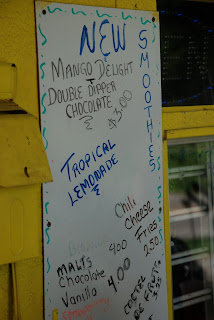 I asked Simel if he had a favorite or a specialty. There it was- the eye twinkle of a business owner about to show off his favorite product. Josie quickly hit the window and ordered me one of their Tropical Lemonades. Simel had been making these for friends and family for a long time. They were such a hit, he put them on the menu at Mango Beach. They quickly became a hit with customers as well. I can tell why- fresh lemonade on crushed ice, chock full of real, fresh cut fruit- mangoes, pineapple, watermelon and more. I abandoned the last melted portion of my cherry shaved ice and took a long drag on the straw. Yup, I can totally see why it's a favorite and I can totally see it becoming my drink of the summer. How often can you get something freshly made with real fruit for $3? 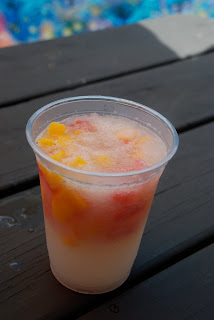 Simel's special Tropical Lemonade with ice and fresh fruit. Have a seat under a mister and suck one of these babies down. WARNING: They don't skimp on the sugar!
Just as I was settling in to my lemonade, another cup came through the what-I-am-now-calling Magic Window: a mango smoothie. It was sweet and tangy and unexpectedly creamy! I asked Josie if it was a dairy base and was surprised to learn there was no dairy at all. She listed the ingredients for me and I realized the creaminess was from honey. Mango, honey, lemon, lime, ice, sugar. Yum. With this one, Josie noted, you can get a sugar substitute. My waist band and my teeth thank you for that option, Mango Beach! 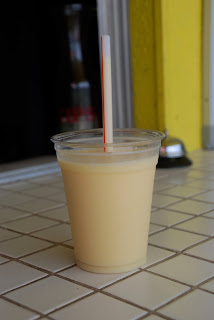 Mango Delight lives up to its name and is just one flavor of smoothie offered out the Magic Window. Pretty much any fruit can equal a smoothie. Just ask.
Currently on deck for Simel's shop: well, another deck. The small area where I sat and enjoyed all my tropical treats has high boys with tall stools and currently seats 8. Semil built all the decking and furniture himself and has another, larger deck area in progress. There is also a small, grassy patch that he is going to attend to and looks forward to making it a place where kids can play and families can relax in the Houston heat. 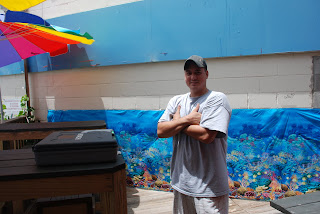 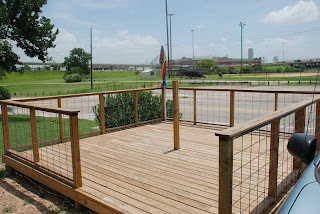 Great new deck in progress. Check out that view! 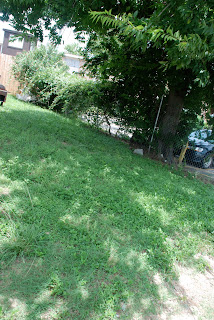 Grassy area away from the street
As far as the rumor that they were closed, they have closed shop for the "winter" both years since opening. This year, however, Semil hopes to expand his coffee selection (for "a lot less than Starbucks" he says) and have someone come in to make crepes to draw business during the couple of sorta-cold months we have.
Now, I'm not saying that anyone should give up any of the other great places for snoballs (Mam's, Tampico, Yeti Sunshine) in the Heights but when this one is calling loudly, answer! 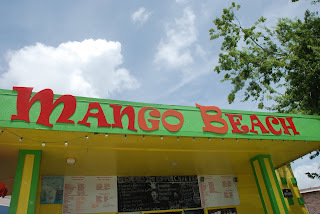