Kroger is basically building a replica of the 11th St store next to Arne's (on those great lots that could be something much more dynamic and beneficial to Houston).

Representatives from Super Neighborhood 22 (The West End) met with CM Gonzales and reps from Kroger to discuss the project. This is what we're getting:

The Kroger Plan
The new store will be about the same size and design as the store on Shepherd at 11th, which will remain open, as will the store on 20th at Yale. The store is expected to open about a year from now (Sept-Oct 2012). The amenities of the store will be similar to those at the 11th Street store.

The property on which Kroger plans to build lies on the east side of Studemont north of Arne’s. The store will be at the south end of the property, facing the main customer parking lot to the north of the store. A fuel center will be placed at the north end of the property together with a small, secondary parking lot needed to fulfill code requirements.
Delivery docks will be located on the east and west faces of an extension on the south side of the store. The three main delivery dock doors will face east toward an industrial area. A small dock door will face west toward Studemont.

Hicks will be cut through to meet Summer Street on the east side of the property. The City's intent is that this will become a through street, but there are some unspecified impediments. The portion of the block that is now Hicks will be improved to current City standards, and the whole block will be built like a City CIP project. Kroger will eventually dedicate that property to the City as street Right-of-Way in exchange for a smaller area of water/sewer ROW that the City will dedicate to Kroger. Access to the delivery docks will be from Hicks/Summer. An employee parking lot will occupy the portion of the lot south of Hicks/Summer next to Arne's; Kroger expects that Arne's will also use this lot at some point (possibly for its employees).

The main entrance to the customer parking area will be just in front of (north of) the store. There will be a new median cut with a traffic signal at this point. The City will be working with Grocer's Supply to move their truck exit to this point. The existing median cut north of there will become a diagonal cut allowing southbound traffic access to the fuel center (and preventing trucks leaving Grocers Supply from cutting across/against traffic to use it to go north). There will be two distinct curb cuts for the fuel center entrance and exit.
There will be a pharmacy drive-through on the west side of the store, entered from the main drive entrance and exiting onto Hicks/Summer.

Kroger will be doing a lot of landscaping on the median, along their side of the streets, and on their parking lot. I didn't note all the species, but the trees on the parking lot will be mostly Shumard oaks for shade with a few crepe myrtles for color. Texas native shrubs and other plantings were also mentioned. Kroger will be adopting the street and median, and will install an irrigation system to maintain the plants. The sidewalk along their property will be five feet wide (25% above minimum standard). Please find attached to this note three photographs of the Kroger plans displayed at the meeting. 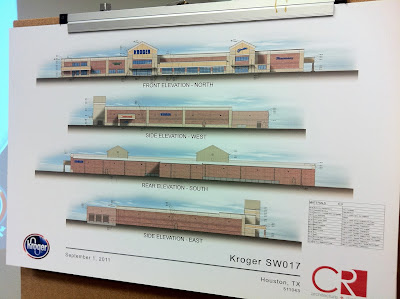 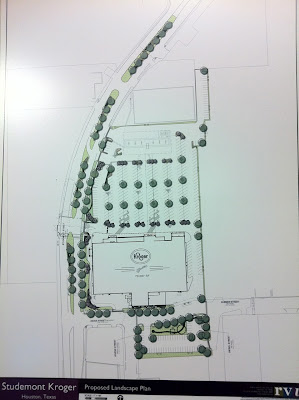 Traffic Study
There was discussion of the effects of the proposed median changes on traffic flow, but there was no mention of formal traffic studies, either for the immediate area or surrounding areas.

When asked about the project’s drainage plan, Kroger representatives told meeting attendees that because the amount of impervious surface is not expected to increase above historic levels that the site is "grand-fathered," meaning that no detention will be required. There was considerable discussion of the desirability of improving the drainage to meet current standards (as if this was a newly developed property). One of the Kroger employees agreed to discuss the feasibility of doing so with their engineering people.

Kroger has also agreed to provide $40,000 for a new fence around Olivewood Cemetery (which lies just west of Grocers Supply).

City Council will be considering a request from the administration to enter an Economic Development Agreement (a 380 Agreement) with Kroger pursuant to which Kroger will be reimbursed for improvements made to the City ROW. The reimbursements will be paid from city property and sales tax revenues produced by the Kroger store at this location, will be capped at $2.5M, and will be repaid over a period of 13 years. The 380 agreement is Agenda Item #16 on this week’s City Council agenda. The full text of the agreement is not included in the agenda backup materials posted on the City Secretary’s website.


From my personal perspective, this project equals an as-if-you-thought-it-could-get-even-worse traffic nightmare on Studewood, a development that will be difficult to ever repurpose due to the gas station and over saturation of the market. Many food deserts still exist with in a few miles of this proposed location. Why not Lindale Park, Eastwood, Independence Heights?

However, a representative from Super Neighborhood 22 had positive things to say about this project, commenting that a grocery has been high on the wish list for the SN council for some time. So, good if the SN, which has a very well thought out plan for their neighborhood, approves. That tells me it's not as bad as I think it is. EDIT: RUMOR has it that SN 22 will actually be coming out against this project after further review. If & when they do, I'll update again.

Still, it leaves me sighing for yet another missed opportunity- and I certainly don't want to see my tax $ go to it. If it was in Independence Heights, a known food desert, I would say "Bring on the 380" but this just leaves me shaking my head. Again.

And for what is sure to be colorful discussion, follow the debate on this morning's Swamplot post.
Posted by Viula at 12:36 PM