Contrary to What You May Think, Contradancing is Fun! 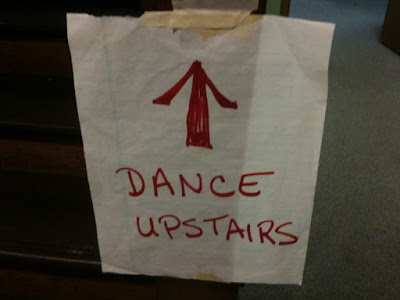 On Saturday afternoon, I started wondering what I was going to write my Monday blog post about. It's been a long week with a certain sinus situation commandeering my head and my attention. I haven't had much chance to think about the heights life.

Then, miraculously, I got this text message from a friend in the 'hood:

In case you are not abreast of the foul news, Mother Clucker has passed on to the next life. Tonight we will host a funeral + memorial dance party at our place. Mourning attire suggested but not required.

I thought, "Yes! A homespun Heights event to showcase the utter quirkiness of our neighborhood." What could be more interesting than a funeral for a chicken followed up with a backyard dance party?

And then I got a message a few hours later that said, "News flash: MC funeral and memorial dance party canceled due to lack of attendants."

I was back at square one. I thought about reviewing a restaurant, but it seemed like too much work. I opted for a veggie burger from the Burger King at 20th and Yale instead (embarrassingly enough).

Then, on my way home around 8:45pm, the story hit me. I saw a sign that said, "Contradance Tonight!" with a sign pointing toward St. Andrew's in the Heights, the Episcopal church at the corner of 19th Street and Heights Blvd.

I haven't seen or thought about contradancing since 2005 when I went on a self-subsidized sabbatical that included a stop over at the John C. Campbell folk art school in North Carolina. Contradancing was a huge deal there, and in an effort to immerse myself in the full experience of folk art school, I took up contradancing. It's a partnered folk dance that involves lots of twirly skirts and live music.

I followed the notebook-paper signs inside the building and up the stairs. I met some very friendly folks who informed me that this here event has been happening for years and years every 2nd and 4th Saturday of the month (except December). So, um, I'm behind the times and am not exactly an up-to-date journalist, but at least I went in to get the first person perspective, right?

The dances are hosted by a non-profit organization called the Houston Area Traditional Dance Society. All the dances include live music, and they run from 8-11pm. Newbies can arrive at 7:30 for an introductory lesson. The cost of admission is $8, $6 for members, $3 for students 16-25, and free for children under 16.

Generally 30-40 people show up for the dances, according to member Roy, and about a quarter of the people on the dance floor this past Saturday night were new. When I asked Roy how someone completely new to contradancing should go about trying to learn, he said, "Just say, 'Yes, I'll dance with you.'" 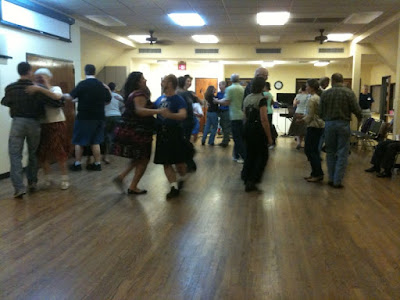 And he's right. Although it's helpful to attend one of the 30-minute intro sessions to learn a few of the staple moves, contradancing is easy to pick up. At the beginning of each dance, the caller spends a few minutes talking through each move of the dance and giving everyone a chance to practice it before the music starts. Although it is a partner dance, you are welcome to show up alone.

I somehow let Roy talk me into doing a dance, even though I was quite intimidated by my lack of recent experience (I tend to be a perfectionist, so spontaneous partner/group dancing without months of lessons is not really my thing). But boy was it fun! Sure there was the requisite guy who takes dancing way too seriously and gets impatient with my inexperience, but everyone else was super-friendly and fun. As you pass from person to person, you make eye-contact and smile. They even provide name tags! What a great way to build community.

So what are you waiting for? Tap into your curiosity and sense of adventure and head over the next dance. I'm not sure that I'll be able to talk my husband (a.k.a. "Partner in Adventure") into going with me, so I may need a partner!
Posted by Sara E. Cotner at 5:27 AM

Email ThisBlogThis!Share to TwitterShare to FacebookShare to Pinterest
Labels: The Heights at Play