This past Saturday night was one of my favorite events in the Heights: Great Taste of the Heights.
Saturday started out rough. It was raining hard for most of the morning. I called the number listed on the website and asked if things were going to proceed as planned. The woman on the other end assured me the event would happen, rain or shine. The big difference for us at that point was walk or drive? Then late afternoon rolled around and the storm broke. The sun peeked out and it generally could not have been more beautiful. Friends met at our house and we decided to walk the 1/2 mile. I'm very glad we did because parking was already a mess when we walked up at 6 PM, 30 minutes before the food was even going to roll out. 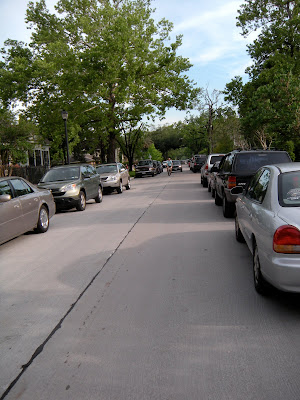 Cars lined Cortland from 11th Street as far south as we could see.
We walked in to the sounds of the fabulous Waltrip High Jazz Band. We had 30 minutes until food, so we went for drinks. Ice cold beer, wine or margaritas. 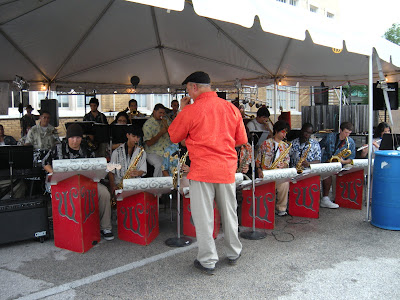 Waltrip High's Jazz Band, decked out in Hawaiian shirts
Note: About 3 minutes after I snapped a couple photos of the band my camera battery died and I looked in the case only to realize my spare was left sitting on my kitchen counter. Please forgive the rest of the images in this post, as they were taken with my cell phone!
Finally, 6:30 and food! We waited a little while to avoid the crush. Man, it was hot under that tent. Still, you could get in and out with a couple plates, eat and go back. A lot of (brilliant) people brought little trays and someone, somewhere was handing out cardboard boxes to people. I had neither but I do have a decade's worth of waitressing skills which allowed me to carry more food than the average trayless diner.
Here are some of the dishes we sampled:
Ribs from Pizzatola's. No, not technically in the Heights but the ribs were good enough that I am willing to claim them. Yum! A couple of vendors handed out coupons at their booths. Pizzatola's offered a discount on a rack of ribs to go. I am certain we'll be taking them up on that! 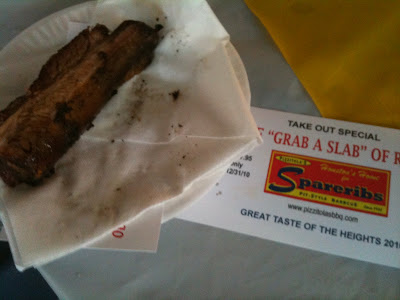 One of the dishes a lot of people were raving about was this simple crostini from Lorenzo's on Washington Ave. It had a nice horseradish cream and finely shaved roast beef. I haven't heard much good chatter about this place from friends and unfortunately one little crostini (the plate you see below was a double order, getting 2 boxes checked off at the same time) isn't really enough to give me much of a feel for it. However, they did include a 15% off coupon so that might make it worth my while. 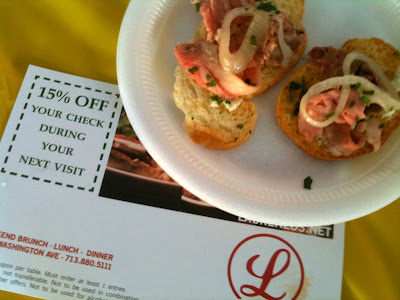 Heights favorite Shade was in attendance, although they were pushing their Montrose restaurant, Canopy, more. Frankly, they can do whatever they want when they serve something this good! Pulled pork on a biscuit with some kind of cabbage salad/slaw. Yum! My hubs and I had an extra ticket, so we had 30 total 'punches' between us, allowing us to try a lot but still get multiples of our favorites. We each had 2 of these and I probably could have eaten more! 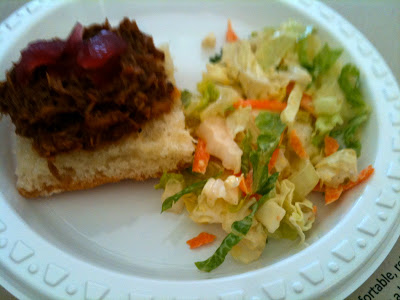 Shuck Daddy's isn't some place I've ever been interested in, either. However they offered a super tangy ceviche that I thought was out of this world. My husband isn't much of a ceviche fan so I got to enjoy this all to myself. They were also the only booth we visited that had 2 offerings, one being dessert. The bread pudding wasn't a miracle of any sort, but it was moist and had great flavor. My husband does like bread pudding but I still enjoyed that one all by myself. 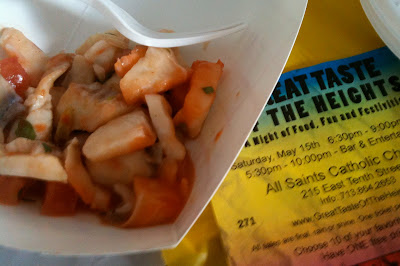 As I mentioned, it was pretty hot, sauna-like even, under the food tent. I wanted to try as much as possible but I didn't want to wait in line too long. We left the Wee One home but did bring the Big Boy (who had a total blast). This did put us on something of a curfew, so time was of the essence. A couple stands that I wanted to hit but the lines were too long included the Onion Creek/Dry Creek stand, which I believe had a blue cheese burger. 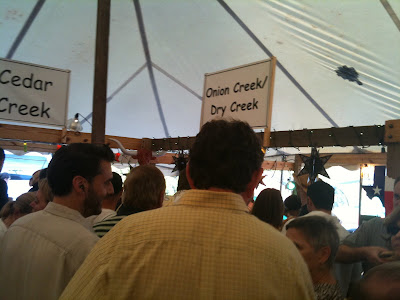 I *think* Onion Creek/Dry Creek were serving up a burger with blue cheese crumbles. I never got close enough to Cedar Creek to even make half a guess!
My husband had his revenge when he got something from benjy's that I am sure was great, but I never even saw it. I forgive him, though, since he walked away from their booth with a gift certificate for lunch for 2. I don't know if they handed this out to everyone, but I look forward to using it soon! 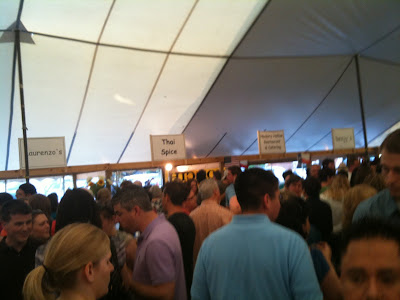 There were just too many people between me and benjy's!
In the end, one of the 1st dishes I tried was also my real favorite of the night. Carter and Cooley had a simple and simply delicious Muffaletta. The execution was perfect, too. The bread was warm and toasted; the cheese was melty; the olive spread was tangy. I forgot to turn in my "Best Of" ballot, but I would have voted for this one for sure. I've never ordered a muffaletta at C&C (I usually go for the tuna salad) but I think I will next time I'm on 19th for lunch! 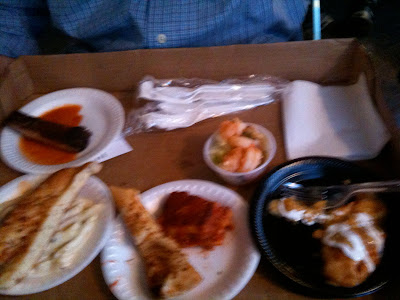 A packed tray with pizza from Pink's front and center
Besides the food, the other big draw of the night is the Silent Auction. I've been watching a lot of Hoarders episodes on my DVR lately and was not interested in bringing anything not totally necessary in to my home, so I didn't bid. There was some fun stuff though. I almost wish my liquor cabinet needed replenishing because a couple of the booze baskets were really fun! 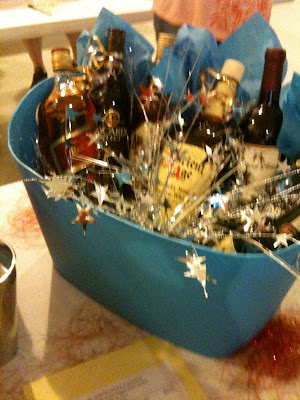 One of the high price items of the night was a prime parking spot at All Saints for Sunday services. I snapped a photo of the 12:30 service certificate, but heard after that it was the 8:30 AM that was the big draw, bringing in over $600! 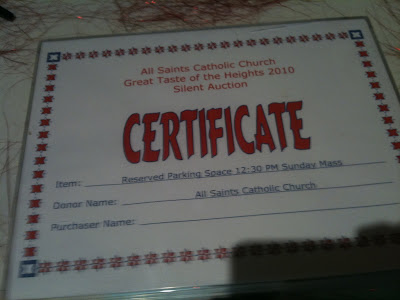 I saw many friends I expected to see and even a few I didn't know were going. There were some Heights celebrities like Heights Life's good friend Margarete from The Artful Corner and Charles Kuffner and his wife Tiffany. There were also more families than the last time I went 2 years ago (skipped last year due to having the Wee One just a couple weeks before). It was fun to see them all eating and dancing. Of course, some adults I know left their kids at home and made it a date night. Overall, it was just FUN and a little taste of the great things our neighborhood has to offer.
Posted by Viula at 6:30 PM