Houston is definitely a city of transplants. Between the medical center and oil & gas industries, I seem to meet more transplants than natives. In my day-to-day life, some of the things I am involved with allow me to chat with people who are relocating here from out of town or out of state. I am relentless when it comes to pushing all the positive things about my own neighborhood, but when you’ve lived in a 200 sq ft studio in Manhattan or already had to deal with a 3 hour commute in LA, the suburbs of Houston have a lot to offer. Large homes on spacious lots and amenities galore, a shorter-than-you're-used-to commute, those famous suburban schools. No matter how hard I try to sell The Heights, it is really only going to appeal to some of the people some of the time.

So, when I do meet someone who moved to The Heights from elsewhere, I am always intrigued about how they ended up in this neighborhood. Anna is one of those people. I first “met” Anna on a local message board where she posted about relocating to Houston. I was pleasantly surprised when I found out she actually did buy here. I felt like it was one in the win column for the inner loop!

I chatted with Anna about how she and her husband, Sam, decided on The Heights and her answers were much like what I expected. It starts with the commute. Sam would be training for a couple years and that means commuting to different offices. They decided that central would be best until they know where he will land long term. They looked all over the north quadrant of the Loop- Heights, Garden Oaks, Timergrove. The usual suspects.

Anna and her husband, Sam, met oh-so-way-back in undergrad at Vanderbilt and have lived in a couple places since then doing things like grad school. Somerset, NJ, and Arlington, VA, are places most people know. I think the places you live before make a real difference in where you are going to choose after. What you want and don't want from past homes comes in to play when deciding on a new one. When they were in Houston house shopping, Anna said that there was something you could feel right away in The Heights. There was an obvious community feel that appealed to them. She also liked how walkable it seemed, which they didn’t have in New Jersey. Anna and Sam basically had one 3-day weekend to come to Houston and make a decision. The sense of community really spoke to them, as did the presence of sidewalks and diverse homes. “A variety of houses means a variety of people,” Anna noted. And, even with only 3 days to look, they knew it wouldn’t have to be permanent if The Heights wasn’t everything they thought it was going to be.

I have to mention that Houston wasn’t as welcoming to them as it should have been! Anna came down solo while Sam finished the last bits of his graduate degree in Geology. She literally moved down here the weekend before Hurricane Ike. Movers were packing their place in NJ as the storm was approaching. Anna wisely headed back east early to meet the movers and rode out the storm up there. That would have been some welcome party!

Now, seven months in, the couple feels pretty settled. They escaped any Ike related issues (and still haven't endured a summer). They love how central they are. While they live in a part of The Heights that some still consider transitional, they have "great" neighbors and feel lucky in that respect. They feel safe (the addition of Sophie, a black lab, has helped). Anna says they have made great friends in the neighborhood but also know people all over metro Houston. They’ve gotten to see a lot of different parts of the city and Anna told me she “hasn’t found anywhere else I could see myself.” Sometimes her friends in the suburbs seem almost “isolated” and she can’t imagine ever feeling that way in this neighborhood. Amen to that!

Right now, Anna feels like The Heights is so big and has so much to offer, she wonders if she can really ever know it all. On deck: exploring all the cool shops and starting to attend more neighborhood events. Of course, I had to tell her to be sure to check all the great information on The Heights Life to help with that! Ha!

While they enjoy so much about The Heights specifically, Anna and Sam have found the transition to be pretty seamless over all. Anna chalks this up to all Houstonians. She laughed a little when she told me “everyone here is just so nice.” I get the amusement. I feel that way, too, sometimes- like it’s such a stereotype but there is just no denying it. It’s a friendly city! 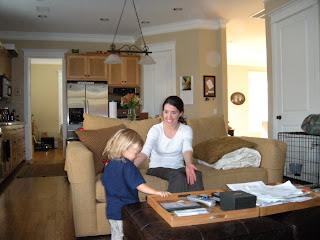 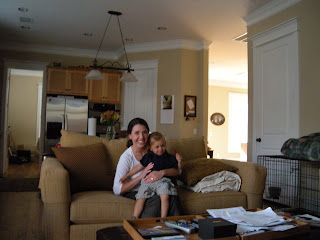 Anna tries to coax my son, Truitt, on to the couch. Got him and photo op complete!
Thanks, Anna, for taking the time to talk with me and allowing our readers to get to know a new neighbor!

Email ThisBlogThis!Share to TwitterShare to FacebookShare to Pinterest
Labels: Our Neighbors