A Superhero with a Paint Sprayer 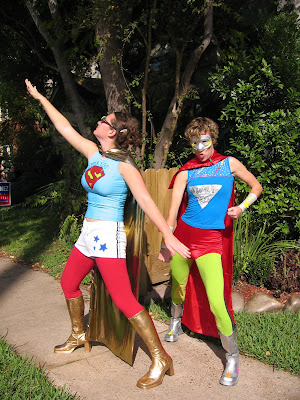 A few years ago, my friend Jamie and I decided to dress up as superheroes for Halloween. She was Super Freak and I was Super Ego.

We drove around H-town in our costumes and did good deeds along the way. For example, we passed out lunches to homeless people and campaigned for a congressperson.

Although we had an immensely fun time, at the end of the day, we took off our costumes and were no longer superheroes.

The real superheroes are those people who make a difference day in and day out, like Paul Luccia, the man behind the Heights Anti-Graffiti Squad.

Paul has lived in our neighborhood since 1999. After Hurricane Katrina, he noticed a drastic increase in the occurrence of graffiti in our neighborhood. He had seen other people volunteering in different ways to help our neighborhood, and he decided that painting over graffiti was something he could do. At the time, he was spending approximately six hours a day, 3-4 times a week dealing with the graffiti (in addition to working full-time as a contractor who has done kitchen and bathroom remodeling for the past 30 years).

With support from the city, local businesses, neighborhood associations, and neighbors, Paul pretty much singlehandedly responds to graffiti incidents in our neighborhood. He takes donated paint, mixes it together to create a "Heights-appropriate color", and repaints the graffitied surface. Usually, the job requires "a person and a half," so he pulls in friends and neighbors as necessary. His goal is to "make it go away as fast as possible."

Paul admits, "Some of it is actually quite nice, but I can't be the arbiter of what stays and goes." He says most of the graffit is produced by "kids who want to flaunt the law and think it's okay to destroy other people's property."

Paul covers the 13 square miles of our neighborhood from 610 to I-10 and from Durham to I-45. His efforts have reduced graffiti by over 99%. He has also inspired other neighbors to step up and do their part, like the woman who cares for the rose garden on Heights Boulevard. After she heard of Paul's work, she asked herself, "What can I do?"

Paul approaches his work with humility and characterizes it as his "way of paying back." He quips, "It's less time than a soccer coach would put it." He enjoys our neighborhood and recognizes that we all must do our part to keep it safe and beautiful. He says, "It takes a neighborhood."

Paul will be hosting the 2009 Annual Paint Drive and Fundraiser this Saturday, August 22, from 8am-12pm outside the Heights Library, which is located at 13th Street and Heights Boulevard.

You can contribute to the cause by bringing any gently used cans or buckets of latex paint, cans of spray paint, and empty (and clean!) 5-gallon buckets. You can also contribute monetary donations through cash, checks, and gift cards. If you can't make it to the library on Saturday, you can also send donations to Houston Heights Association, Inc. at P.O. Box 70735, Houston, TX 77270-0735 and write "Graffiti Squad" on the memo line.

A Few Ideas for Preventing and Dealing with Graffiti from Paul:
My conversation with Paul reminded me that it doesn't take a costume to be a superhero; it takes a commitment to contribute to our neighborhood on a regular basis. Thanks for the inspiration, Paul!
Posted by Sara E. Cotner at 5:07 AM

Email ThisBlogThis!Share to TwitterShare to FacebookShare to Pinterest
Labels: The Heights at Work