Getting Our Piece of the Pie

You know what we are? We are a neighborhood of stalkers. You know it's true. Any and every building that so much as has a work permit attached to it is routinely investigated by neighborhood residents. Because I write this blog, I am always getting emails asking "What's going on here? When is that going to open? Who is doing this project?" Because I write this blog, I feel obligated to try and answer. This means I may be one of the worst stalkers of all.
Of course, when you paint your building lime green, it's not too hard to catch a stalker's eye. And when we hear you are going to serve food, well, the whole neighborhood wants to know about it.
This is how I ended up being the 1st dinner customer at Pie In The Sky Pie Company. I wish I could boast that I was the 1st customer at the Heights location altogether, but I missed lunch. It wasn't until after I fetched the big boy from school and found out my husband wasn't going to be home for dinner that I took the boys on a ride and we cruised down 19th. I had watched the building get painted, the Pie sign go up, the interior turn orange, and more recently a "Now Hiring" sandwich board placed on the sidewalk. When that sign only remained outside for a couple of days, I knew we would be having our pie soon enough...
So, last Friday I was going to take the boys to Lola for burgers, but it was too early and we decided to go for a ride around the neighborhood.  That's when I saw the new sign: Now Open 7 am - 10 pm. 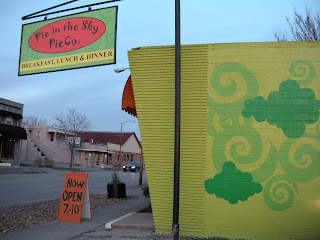 It was only 5 pm so it was pretty quiet inside. I was greeted at the door by Daniel, who would also be my waiter. He lives in the Heights and is about to start culinary school at the Art Institute. Being a stalker, I had to ask! We had our choice of tables and selected one near the back, close to the kitchen. There are banquet seats against each wall, with predominantly 2tops and a few center tables. I laughed when I saw the stack of 2 highchairs. Sorry, but anywhere casual and affordable with decent food is going to need more than 2 highchairs in the Heights. 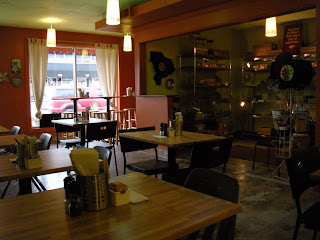 Daniel gave me a menu and explained that I would just write down my order on the small pad in the center of the table. Each pad has the table number on it. This seems like a quirky way to do things  and that it probably leaves a lot of room for errors, but this is not their 1st location so I am guessing it's what works for them in Conroe. 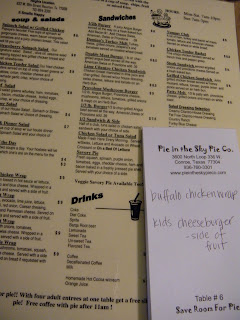 I wrote down my order and gave the pad to Daniel. I was immediately excited to see a Buffalo Chicken Wrap that had BLUE CHEESE! I don't know how, when or why restaurants started thinking that "buffalo chicken" anything is supposed to have ranch. It's not. Buffalo chicken gets blue cheese. The sky is up and 1+1=2 and buffalo chicken things get blue cheese. So, when I saw that Pie In The Sky had acknowledged this fundamental truth, I had to order it! My older son likes cheeseburgers. My other son eats babyfood. However, he does like to gnaw on something now and then, so for him (not at all for me) I ordered fried green beans.

When my wrap came out, I was kind of taken aback by the size. It was giant! The tomato tortilla was eye catching. Inside was deliciousness. Ripe tomato, crisp green lettuce, lightly fried white meat chicken and creamy blue cheese dressing. So far so good. And then I bit in and it got better. There is an unmistakable taste that is Frank's Red Hot. I was in spicy, chickeny, buffalo heaven. $9 included a side of fruit, but I feel pretty confident I could have substituted fries or chips if I wanted. 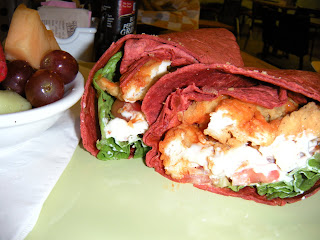 The $3 basket of fried green beans is a good deal and was great for sharing. They weren't as flavorful as I would have liked but that didn't stop the baby from gnawing a few down. The big boy just ate off all the breading and left the beans behind. He's 3 so that really shouldn't be taken as commentary though. I ate a couple and found myself wishing I had the ranch dressing I was so scornful of earlier. Oddly, what stopped me from asking for it was the fact that I had sent Daniel back and forth a couple times already for things I had forgotten to write on my order pad. It was his 1st night and I was his 1st table. I didn't want to add to the stress by running him ragged. The decade I spent as a server still has quite the hold on my conscience when I eat out. I will order the fried beans again and I will ask for ranch at the outset. After all, most fried veggies are just a vehicle for some kind of sauce anyway. Makes us look more civilized than if we eat ranch with a spoon. 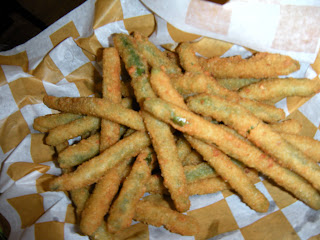 My son's burger was a kid's burger and doesn't warrant too much description. It was a good size- that is smaller than some places serve for a child- as was the side of fruit. It was about 1/2 of what I got with my wrap, which is appropriate for a child and none went to waste. At $4, including a drink, the 6 items on the kids' menu are sure to cement Pie as a family destination in the Heights. 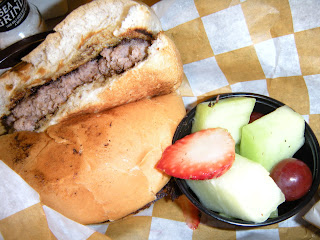 One adult dinner and one kids' meal make it hard to really tell a story about a restaurant. However, the food was good and the service was great, especially for opening night, so it won't be very long until I go back. In fact, Friday night is as good a night as any! Sure, there was a little on-the-job-training and Daniel had to ask the kitchen a couple things for me, but they have their system in place. By the time I left there were 5 more tables full and, as predicted, 3 had kids with them. If we do make it up there tonight, I'll be curious to see if they added to their highchair inventory.
More and more restaurants are opening around the Heights. It was only a couple years ago I debated whether or not this would ever happen on a local message board. "The Heights is dry and that is why no one will open restaurants here." Wrong on both counts. Glasswall, Berryhill, Stella Sola and Big Mamou all operate in a wet zone. Pie is in the dry zone, though. I asked if we would be permitted to bring wine and they said sure. There will be a corkage fee of $1/glass, meaning you can have 2 people drink 4 bottles of wine (and take a cab home!!) and the fee would be $2. Make sense?
Lest I forget, in addition to dinner they also have... PIE! Cherry streusel, chocolate peanut butter, sour cream raisin and Southern pecan were just a few on the list that appealed to me. However, I let the late-working husband dictate the pie choice and he selected Starwberry Rhubarb. I ordered a slice of pie to go. You can get a slice, a 9" or a 6" pie. They have some sugar free options and you can pre-order lemon or chocolate meringue. They also have sweet breads. I sampled the blueberry streusel and orange-cranberry. They were just bites but wow- so moist and light and packed with flavor. I can definitely see getting one of these to-go on a Saturday morning for the family. As far as the slice I brought home to my husband: After dinner, I left the kids with Hubs and headed out to my neighborhood's monthly happy hour. I got home about an hour later and asked how the pie was. Hubs said, "Go have a bite right away because if you wait much longer it will be gone." Mmmmmmmmmmmmm. Tooth says "thanks!" 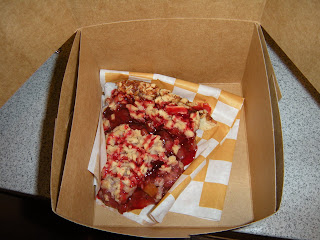